Link to this page

Biography of Hans, the Younger Holbein 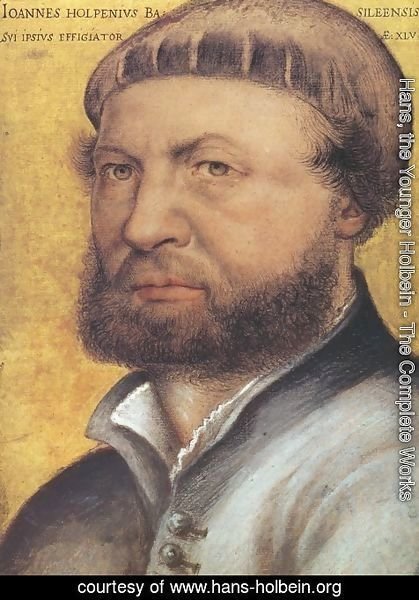 Hans, the Younger Holbein was born in Augsburg, and learned how to paint from his father Hans Holbein the Elder. In 1515 he and his brother Ambrosius Holbein went to Basel, where they designed prints, murals and stained glass. During this period, Holbein drew a famous series of pen and ink illustrations in the margins of a book owned by his schoolmaster, The Praise of Folly, by the Dutch humanist Erasmus. Holbein was introduced to Erasmus, and later painted three portraits of him.

In 1517 Holbein went to Lucerne, where he and his father painted murals for the mansion of the city's mayor; he was also charged with taking part in a knife fight. In 1519 he returned to Basel where he ran a busy workshop following the premature death of Ambrosius. He designed murals and altarpieces, illustrated books, and contributed to Martin Luther's translation of the Bible. Like his father, he designed stained glass windows and painted a small number of portraits. He married Elsbeth Binzenstock, the widow of a tanner, shortly before he was accepted into the local artists' guild. 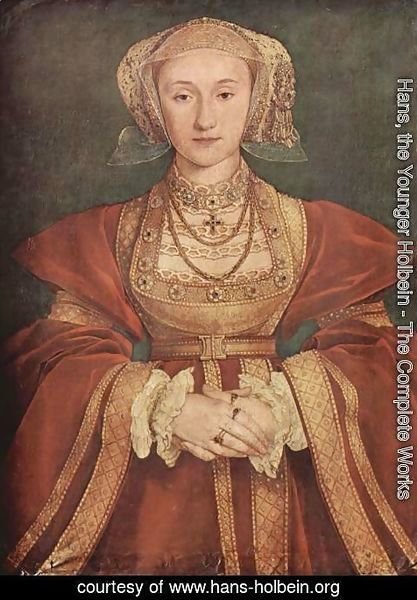 The Reformation made it difficult for Holbein to support himself as an artist in Basel, Switzerland, and he traveled to London in 1526. Erasmus furnished him with a letter of introduction addressed to the English statesman and author Sir Thomas More. Holbein painted many portraits at the court of Henry VIII. While there he designed state robes for the king. He also designed many of the extravagant monuments and decorations for the coronation of Henry's second wife, Anne Boleyn, in the summer of 1533.

Several extant drawings said to be of Anne Boleyn are attributed to Holbein. One portrays a woman with rather plump features dressed in a plain nightgown and coif. Some have said that this shows the queen during pregnancy, sometime between 1533 and 1535, but recent research shows that the subject is most likely one of Anne's ladies-in-waiting, possibly Lady Margaret Lee or her sister, Anne Wyatt. It seems more likely that the finished portrait Holbein painted of Anne Boleyn was destroyed after she was beheaded on May 19, 1536 on false charges of treason, adultery and incest.

Holbein painted Henry's third wife, Jane Seymour. He also painted Jane's sister, Elizabeth Seymour, who married the son of Thomas Cromwell. This portrait was incorrectly identified as Henry's fifth wife, Queen Catherine Howard, when it was discovered in the Victorian era. After Seymour's death Holbein painted Christina of Denmark during negotiations for her prospective marriage to Henry VIII. The likeness met with Henry's approval, but Christina declined the offer of matrimony, citing a desire to retain her head.

Holbein also painted Anne of Cleves for Henry VIII. Henry criticized the portrait as having been too flattering; it seems likely that Henry was more impressed by extravagant praise for Anne than with Holbein's portrait. There is some debate over whether or not a portrait miniature of a young woman in a gold dress and jewels is in fact Holbein's painting of Henry's fifth wife, Catherine Howard. 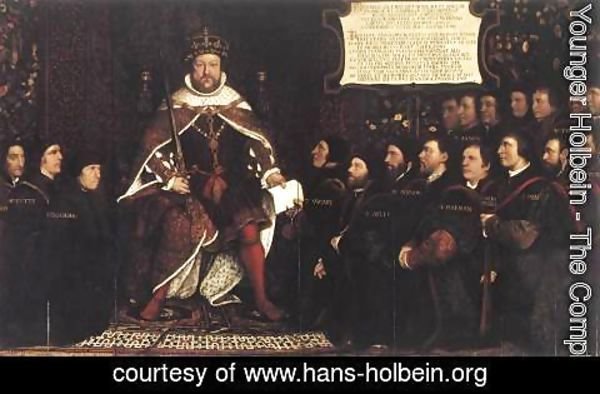 In his later years Holbein worked in both Basel and London. On one of his stays in London he painted German merchant Georg Giese, brother of Tiedemann Giese, at the Hanseatic League outpost in London, called the Steelyard (Stalhof).

While Holbein was working on another portrait of Henry, he died in London, apparently a victim of the plague. He made his will on October 7, 1543, and a document attached to it, dated November 29th, describes him as recently dead.

Holbein always made highly detailed pencil drawings of his portrait subjects, often supplemented with ink and colored chalk. The drawings emphasize facial detail and usually did not include the hands; clothing was only indicated schematically. The outlines of these drawings were then transferred onto the support for the final painting using tiny holes in the paper through which powdered charcoal was transmitted; in later years Holbein used a kind of carbon paper. The final paintings thus had the same scale as the original drawings. Although the drawings were made as studies for paintings, they stand on their own as independent, finely wrought works of art.

He painted a few, superb, portrait miniatures, having been taught the art by Lucas Horenbout, a Flemish illuminator who was also a court artist of Henry. Horenbout painted Holbein in perhaps his best miniature, and the best portrait we have of Holbein, who never made a self-portrait (illustration).

David Hockney has speculated in the Hockney-Falco thesis that Holbein used a concave mirror to project an image of the subject onto the drawing surface. The image was then traced. However this thesis has not met with general acceptance from art historians.

A subtle ability to render character may be noted in Holbein's work, as can be seen in his portraits of Thomas Cromwell, Desiderius Erasmus, and Henry VIII. The end results are convincing as definitive images of the subjects' appearance and personality. (From Wikipedia)

Report an error on this page